The only kind of stores I’m even vaguely interested these days are almost always the non-mainstream kinds.  And sometimes this means they aren’t even stores, but perhaps stalls at the local artisan market.

Mainstream shopping environments like big department stores and women’s chain clothing stores usually hold no personal interest for me – I find their wares to be so samey samey and bland.  With my ‘wonderful working wardrobe’ approach to ‘incoming’, I find there’s just nothing interesting in these kinds of mass marketed stores for me, most of the time.

But I still like to browse, I see shopping precincts a bit like art galleries these days.  Plus being in shopping precincts gives me good mental fodder for my writing and speaking on conscious consumption.  So it’s a professional interest more than anything else when I find myself in the big chain stores.

One of the non-mainstream kinds of shopping I do enjoy, probably more than any other kind of shopping, is in pre-loved stores.  I’ve written about this before (try here) but I wanted to talk specifically today about charity store shopping, a particular flavour of pre-loved shopping.

In this two-part post, I’m going to share my observations about charity store shopping first; and then in part 2 I’ll share the pros and cons of this type of shopping, and my top tips for getting the most out of it.

It’s life, Jim, but not as we know it

I’ve noticed a real difference in how charity stores are displaying their stuff for sale these days.  I’ve long been a charity store haunter, although my appreciation for this kind of store, and shopping, is only about a decade long.

So I know how these stores used to go about displaying and selling their wares, in times past, and it’s a far cry from how they’re doing it now.

I attended a Creative Writing Masterclass in Brisbane’s funky West End recently.  This is a part of Brisbane that has a bohemian, artsy, alternative vibe – and it wears that vibe with pride.  It can be funky, it can be grungy, it stylish and its shabby all at once.  Certain neighbourhoods can do that, can’t they?  It’s not an easy balancing act, but West End nails it. 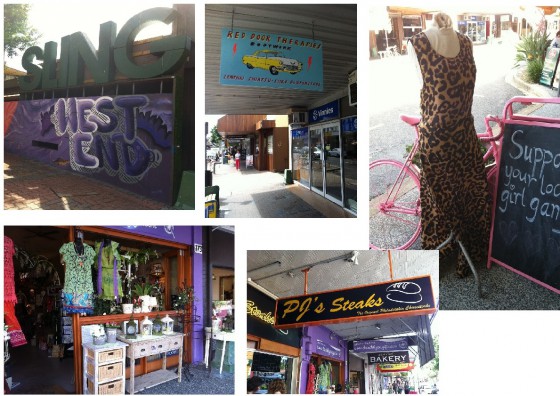 As I was looking for a parking spot, trawling up and down the streets with their 10 Minute Parking signs, travelling at speeds that seemed to encourage the motorists behind me to add an encouraging horn toot, or two or three (so helpful, other city drivers), I noticed two charity stories – a  Vinnies and a Lifeline… “Aha” I said to myself, “I must go into both of those stores today”.

Even though I don’t shop much, I am still able to spot a possibly excellent shopping experience from a moving vehicle.

And because I arrived 45 minutes early for the creative writing workshop, I was able to attend both these stores and sample their delights.

First up – Lifeline.   A long thin store, it was clean and it also had a clear smell, if I can describe it that way. Smell is very important in pre-loved and especially charity shopping, because the items aren’t new.   In times past, and sometimes present, the stench in charity stores would hit you as you walked in the door – a dank ‘old’ smell, sometimes mixed in with other unpleasant odours indicating the unknown origin of the items for sale.

So a major plus was the clean, clear look and smell, which was my first impression.  It also had a good layout for such an awkward space, being long and thin as it was.

The women’s clothes and shoes at the front, nicely displayed by colour and type, with a few display areas to draw your eye.  As you moved through the store, we saw men’s and children’s wear, with homewares and some books toward the back.

The staff was friendly, I got a lovely morning “hello”, without being overbearing or acting like secret service agents by following you around the store.

Throw me a lifeline! And that cute turquoise clutch…

Next up – Vinnies.  This store had a more vintage and retro look, and it was a larger store than the Lifeline, square in shape.  Unfortunately, that ‘old’ smell hit you as soon as you were two paces into the store.

But on the plus side, they had a really interesting layout with old and antique furniture around and about the store, displaying interesting knick knacks and merchandise for sale.  They had a retro section (including a few wedding dresses from what looked like the 1970s) and a large men’s section (so many business shirts!) which you don’t always find in charity stores (perhaps men dispose of their unwanted clothing differently to women?).

Very efficient staff whom, if my eavesdropping was reliable, also attend to the in-store displays at other Vinnies around the city. 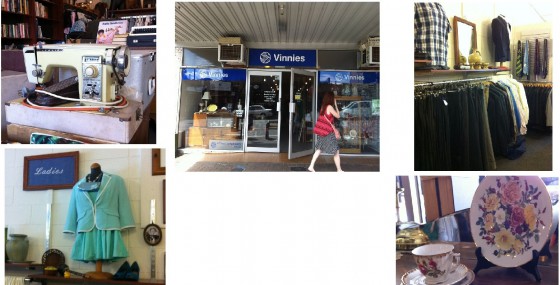 These two stores were excellent examples – a very representative sample, in my view – of how many charity stores are presenting themselves and their wares in the highly competitive retail market.  There’s many more who take a similar approach.

It’s not for everyone

But I am saying that charities have clearly cottoned on to the fact that many people are giving away so much of their stuff, and many other people are willing to buy those discarded items.  And if they make a good showing of displaying those items, then it increases both the price they can charge and the amount of items they can sell.

In Part 2, I share the pros and cons of charity shopping, and my Top Tips for charity store shopping.

What Men Can Teach Us About Shopping