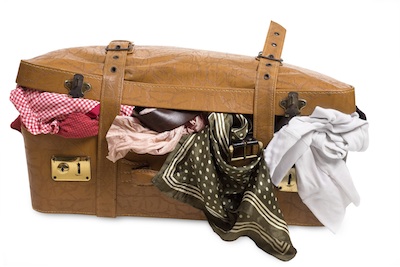 G’day from blog #42. We got home from New Zealand on Saturday. I reckoned that if there was a bridge from Auckland to Brisbane, it would have been quicker to drive. All that airporting just soaks up the hours, doesn’t it? You practically need a packed lunch to get through security and customs alone.

By the time we got home, a mere 14 hours after leaving Auckland, I was a bit over it. Maybe that should be Over It, because it was a non-specific, indefinable feeling of general testiness. I could’ve given Oscar the Grouch a run for his money.

The unjoys of unpacking. I mentioned in blog #33 that the process of packing I quite enjoy (as does Ashton Kutcher, apparently). But unpacking? Not quite so enjoyable. Maybe it’s the feeling that the holiday is undeniably over now. The impending “back to work”ness that comes with putting things away, even if its been a work trip. Whatever it is, unpacking does not draw one in quite as much as its opposite. Its moments like this that I wish I had a personal valet. (there are other moments when I feel this too. Like when my woolen jackety cardigany things need hand washing. Man, those things are heavy when they’re wet!). But I noticed that on Saturday, something had changed.

This time it was different! Whilst it wasn’t a barrel of laughs, unpacking from this trip wasn’t quite so bad. Wasn’t quite as much of a chore. And I worked out why that was. It’s because there was only a few more things to unpack than I had packed one month ago. There were no new clothes or shoes or accessories to find new homes for! The new items that were brought home on this trip were:

Those are the extras we brought home with us. Finding homes for all those things was easy, as they either had an existing place to go (DVDs and cookbook) or I’d thought about where I wanted to put them before I bought them (glass Koru and wooden paddle).

What temptation? I was also really pleased that I’d not bought anything on the trip, and not had a terrible time resisting something irresistible. I’d exercised some habit-breaking muscles by going into some stores for the sole and exclusive purpose of appreciating without consuming. And I’d learned a whole lot about the world of media. Altogether, a stunningly successful trip! Now it’s back to business as usual in the home office, which feels like a great place to be right now. Feels like All’s Right With The World (you know that feeling, right?).

Something about being away from the everyday brought me more in touch with my creativity. New Zealand was an ‘opening’ experience. More creativity, more connectedness, more clarity. 3 darn good C’s. Right?

Near Misses and Misplaced Fear