Howdie and here we are nearly at the end of March. One month into autumn and we have even had a few days that felt autumny. Not blisteringly hot is what I really mean. We’re up to blog #27 so we’re making good time, my fellow travellers. Lost, but making good time. 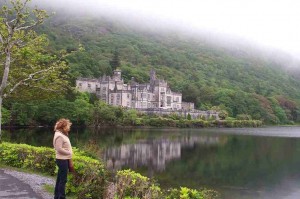 So, what’s this picture all about? Well, for those who have travelled to the emerald isle, it’s Kylemore Abbey which is located in the north of Ireland. We visited there in 2004 and that is indeed me standing there, pensive-like, gazing upon the glorious abbey. The reason I’ve included this photo and have titled this posting Travelling is because I’m curious about something.

If you are not a shopper, how do you spend the lions share of your time when travelling? My guess is the answer is: looking at things. Like abbeys. And piazzas. And ruins. And long lines of tourists standing in front of you to enter the Louvre.

In the last ten years, we have travelled to these countries/regions/cities. And I have shopped in every single one of them: Japan, China, Korea, Malaysia, Hong Kong, Hawaii, San Francisco, Baltimore, California, Las Vegas, Minneapolis, New York, New Zealand, Toronto (and other parts of eastern Canada), London, Capetown, Dallas, Hobart, Melbourne and Moree. That’s a lot of shopping. And such fun too!

I love looking at things I have bought in those places and sifting through the photo album in my mind (and on my laptop), reliving the experience of being in that place….. (fade to flashback scenes)

It’s also true that in all these places, I did other things apart from shop. Like sleeping. And eating. And sight-seeing. But shopping has always been a part of my way of getting to know a place. Even a window-shopping expedition, sans purchasing anything, can tell you something about a place that visiting its museums, harbours, art galleries and drinking establishments will not.

Going Au Natural. I like visiting urban places, cities, where shopping (or at least shops) are often hard to avoid. I guess for people who prefer to travel to places with, like, natural delights (like mountains that require trekking, and wetlands that require tramping, and lakes that require canoing), then shopping is not something that comes up a lot. There not being too many shops in, say, Base Camp. Lots of dogs, but not a lot of shops (I saw a documentary on it once).

Wake me up when we’re done. Even the shops in big cities that carry gear you need to visit those places (like North Face and Patagonia) bore me a bit. They’re full of camping equipment and porridge-coloured thermal underwear and wicking-away outer gear in exciting colours like maroon, grey and navy. Necessary items if you are about to trek the Laya Gasa in Bhutan, I’m sure. But it’s all a bit samey-samey. I mean, where are the cheetah print thermals? The zebra print sleeping bags? The ocelot waterproof gators?

Maybe the thinking is that such printed items would frighten the wildlife? Or maybe such adornment would be too flighty, fancy and silly for the serious business of trekking. I mean a serious trekker has dun-coloured boots, not leopard-printed ones. Right?

You Don’t Wear What You Can’t See, Part 2
Want to share?