Hiya and we’re up to blog #13. Lucky 13. Yesterday was Australia Day (January 26). This public holiday late in January often marks the end of the holiday period for many people – it’s definitely a back-to-work feeling after it (even if you’ve been back to work for weeks already). 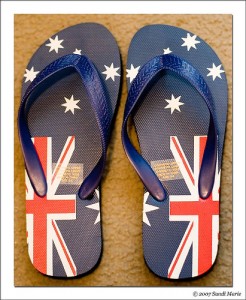 The photo here is not one I’ve taken but was to be seen a lot in newspapers and magazines in the lead up to Australia Day. For those not acquainted with the name of this particular footwear (quite possibly my Northern Hemisphere friends), we call these thongs. In other parts of the world, they’re called flip flops.

Dip thong? This difference in labelling can cause some interesting misunderstandings leading to much mirth and smirking. Thongs in other parts of the world refer to an item of clothing most commonly worn by women (although some men wear them thesadays — in olden days, apparently men were the most frequent wearers, although they were called loincloths them…. nowadays, jockstraps may be the most masculine version of the thong?) as an undergarment.

The word “thong” comes from the English thwong which, way back when Shakespeare was a lad, had something to do with flexible leather cords. Who knows what uses flexible leather cords were put to in those days, but one does wonder if it was used to separate either toes or, ahem, buttocks. It’s not a pretty thing to imagine, really, is it? Imagining Blackadder or Lady Stuckington-Smythe calling for their thwong. Hmmmm.

Thong throwing. One favourite Australia Day activity, apart from vegging out in front of the TV or having a barbecue at home and drinking litres of alcohol, is to attend some sort of community event where thong throwing is included in the lists of fun sports. Along with playing two-up (another game I do not understand, involving coins and the throwing thereof ina display of higher than usual testosterone-fuelled idiocy, although I mean no disrespect to the “diggers” (war veterans) who typically are associated with this game on ANZAC day), thong throwing is a uniquely Australian thing to do, and has something to do with our convict heritage where there was nothing to do for years on end, so watching cockroaches race, throwing pennies in the air and throwing one’s footwear was invented as a way of passing the time.

I just made all of that up, but it may not be far from the truth. I mentioned this thong throwing thing to a colleague in the USA and she was most amused. She thought it was the other kind of thongs being thrown. Imagine that! Skimpy pairs of knickers made out of rubber bands and dential floss, being flung down a cricket pitch! Now, that’d take some skill and be worth watching. Right?

What’s In and Why