Here we are at blog #81.  The date stamp says Saturday, but it’s really Friday here in Philadelphia.  What a sensational city this is!  I’ve been here a couple of days and cannot wait to explore more!

I got to thinking about transference recently.  You know, when you take emotions about Thing (or Person) A and you transfer them to Thing (or Person) B.  In a shopping context, it’s when you take your love of clothes shopping and transfer that into an escalated set of shopping activities around something else… like homewares.  Or makeup.  Or hybrid teas imported from the upper Himalayan mountains. 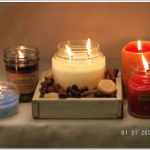 When I first started this challenge, just over 10 months ago, I was frequently asked whether my shopping in other areas was likely to increase.  You know, did I think I’d be buying more throw rugs, or cushions, or aromatherapy soy candles.  It was kinda freaky how often this question would be asked.

I never thought much about it until recently.  When you ponder that question for even the briefest of moments, you realise that the basic assumption is that the shopping compulsion in and of itself cannot be dealt with – it just moves places.  We take it from here, and move it over to here.   You still have the compulsion to shop, right?  You just aren’t buying clothes.  Now it’s… something else!

I can understand why this question seems such an obvious one.  And I’ve spoken recently about how cute and ‘attractive’ a shopping compulsion is, as opposed to an addiction to, say, alcohol.  An alcohol addiction, in its worst manifestation, doesn’t look good (or smell it, either).  At its worst, you have someone throwing up into the ornamental fountain.  Not so pretty.

At a shopping compulsion’s worst, the afflicted individual brings home an array of starched cardboard bags, dangling from their wrist by roped cords, filled with lovely looking things.  Even at its Hollywood-enhanced best (am visualising that scene from Confessions of a Shopaholic where Becky is sitting looking dolefully at her “designer sale” purchases, with mussed up hair and a facial expression that conveys confusion, frustration and resignation) – there’s an aesthetic quality to shopping addictions that makes it seem…. well, not that bad really.  Right?

So, back to transference. Like much of what Freud uncovered about the human psyche, transference is characterised by its unconsciousness – we don’t know we’re doing it.  Once we’ve registered the behaviour, it’s no longer transference – or at least no longer “just” transference… maybe it’s more “deliberate transference”.

That’s the thing with awareness – it shines a bright light into the darkness.  You can no longer use the excuse that you simply didn’t realise….  Ah, the exquisite pain of waking up! 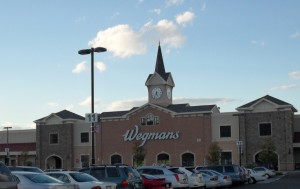 So I was grocery shopping yesterday with my friend Cindy, with whom I am staying in Philadelphia.  We were in this enormous grocery store (the grocery stores here in America are humungous – heaps bigger than those we have home in Oz) – Wegmans.  That’s it to the left.  We were able to walk from the car to the entrance (I was looking for the shuttle bus to take us but there didn’t seem to be one).

I love grocery shopping in other countries.  Such an everyday activity is transformed into an exploration of delight and differences!  I’m sure if I had to do it every day, it would be as thrilling as my trips to Woolworths at home.

We made our way through each aisle of the store – who knew there were so many choices of milk products?  Or that you could buy orange cauliflower? This particular Wegmans had a large homewares section – cookware, crockery, silveware, napery — all the good stuff and lots of beautiful colours and patterns.

So, we got to what I think of as the “BBQ” section – the disposal plates, cutlery and napkins.  And they had this gorgeous animal print stuff.   Now, at home, I’ve seen lovely coloured paper napkins – but in a supermarket, never the printed stuff.  And never animal print.

I looked, I picked it up, I put it back.  I told myself that it would be a nuisance to carry back home.  Then I told myself that I’d never be able to get it at home – this was special.   And, ooh, ooh– I could post it to myself!  How about that?  It was light enough to not cost a fortune in international postage.  My friend Cindy encouraged (or was that ‘enabled’?!) me from the sidelines.   She thought it was special, too. 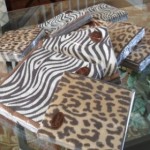 I ended up buying the selection you see here.  Two of each of the sizes in each pattern, so 12 packets in total.

Is this transference?  Perhaps, just a little.  Considering the choices I have had during the last 10+ months to transfer my shopping into other areas, and how much I have resisted doing that when faced with various temptations, I’d say it’s not a massive transference.

But it probably still is transference, no matter how small the degree.  I know I’ll enjoy using those napkins and will get a kick out of laying them out.  They’re so lovely that I just hope I use them fully in the way they were intended, and not try to get them dirty!  (as in “ah, excuse me, I know you’re eating pizza and half the sauce is dripping down your chin — but would you mind, ever so much, using a square of plain paper towel instead of that beautiful zebra print napkin? Thank you so much...”).

Apparently transference is common.  We do it all the time.  We just don’t know we’re doing it.  In this case, the light of my awareness was dim, but it was turned on, for sure.  Kinda like the “low” setting on a hairdryer – this was the ‘low’ setting on my awareness torch.

When you simply transfer your compulsion for clothes shopping into shopping for other things, and you continue to consume at a similar level and pace, nothing has changed.  Fundamentally, the unconscious patterns are still in place – intact and untouched.  The surface has not been scratched and the source of the issue has not been explored.

So, if you’re serious about getting to the root of your unconscious shopping habits, this is obviously not good.  Transference is a first class way to avoid.  Avoid the issue, avoid the root cause, avoid the rising panic that some women feel when confronted with the thought of not shopping for an extended period of time. 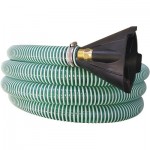 And like rising damp, rising panic will only get worst unless some serious interventions are employed (luckily, rising panic isn’t treated with high pressure liquid chemical injections involving industrial green hoses and weirdly shaped nozzles –  the same cannot be said for rising damp).  And transference of your clothes shopping compulsion into another area is not the answer.  Waking up, in all its glorious and challenging ways, is.

The good news is that help is at hand.  I’ve faced down that rising panic, and it isn’t so terrible.  I’ve experienced a range of emotions when shopping could not be used as the ‘answer’ and I’ve not only lived but felt relief. at getting to what’s on the other side of that.  Come to the other side – there are rainbows and unicorns!  Seriously – I can help you do it too.

So, I’m off to the local post office now.  I have some very light disposable paper napkins to send home.  A mere 12 packets.  They’ll probably make it home before I do.  Right?

Shopping and the City