Well, we’re up to blog #37 and it’s great to have you with us! This week I had the extraordinary experience of being on New Zealand’s premier early morning TV show. They’ve called it Breakfast – where do they come up with these names? (the show after it is called Good Morning – I mean, go figure).

How did this happen? Well, great question! It started with me having this idea land in my brain — you’re going to New Zealand anyway, why don’t you make “the most” of the trip and see if you can get any media interest in the 12 Month Shopping Challenge? That was kinda how the thought formed. I’ve chatted a little bit to one media person in Australia who said the story was interesting… This is great feedback, btw, because as a consumer of the media, it’s hard to know how they determine what’s interesting. And what’s not. It seemed conceivable that my year of no clothes shopping may be either.

Press. Release. So I crafted a press release, of sorts. I found a template of a press.release on the internet and basically followed it, like a formula. Inserted a few silly sentences, all based loosely on the truth. I then did a google search of New Zealand media. Very high tech. I typed in terms like “New Zealand television” and “New Zealand radio”. Gosh, it was thrilling stuff. I sent the press.release off to a few people with a short email note. I had no idea what the response would be. No. Idea.

Ring ring. The next day, the day before we were to leave Australia, I was at the hairdressers, as one does… I’d just finished being massaged and rinsed off (hair, people, my hair we’re talking about) when my mobile phone rang. Dripping and slightly concerned about electrocution, I answered the phone and it was a producer from NZ TV’s Breakfast show. They thought it was a fabulously interesting story. I may have added in the “fabulously” later. Long story short (or it is it too late for that?), they scheduled me to come on the show. Who’d’ve thunk it? I was really thrilled. And surprised. And the shoulders of my shirt were really wet.

Pre-Interview. Couple days before I was due to go on, someone from the show did a pre-interview with me and that’s when I told them about the home footage I had taken of my walk in robe. You know, the thing that used to be a bedroom, where all my clothes pay rent to live there. That sparked their attention, so I sent it through to them. Little did I know how much that footage would appear in the final 7 minutes that went on screen. And if I’d known, I don’t know if I would’ve shared it with them. But then, I probably wouldn’t have gotten the 7 minutes then.

Speaking of the 7 minutes, Lord Jeffery Archer got 7 minutes the day before in an interview on the same show; all the other segments were about 3 or 4 minutes. I don’t know why this amused me so much. Maybe it’s because Lord Jeffrey is such a sophisticated and authoritative sounding man (the private school system (which they call the public school system, don’t they?) in England will do that to a person – 12 year olds come out of their system sounding like that, don’t they?). And my topic just seemed so …. light-weight… in comparison. Not that Lord Jeffrey spoke of anything particularly weighty. But you should’ve seen the shots of the view from his house (or house-sized apartment)! The Thames, glittering and fresh as it always is. Big Ben, donging away. Sheesh.

My scheduled day, Monday, was moved to the Wednesday. Something to do with the male presenter of Breakfast, Paul Henry, being the in the UK to cover some political thing. Elections, I think they said.

The Day Arrives. Wednesday May 5 arrived. As we all knew it would. Days are like that – predictable. They come. They go. So, after something of a fitful sleep, up at 5.30am, dressed and made up, into the corporate taxi, across the Sydney Harbour lookalike (but only smaller) bridge. Good thing Dan came with me, we had a lot of laughs and it kept me relaxed. There was some mix up with the corporate taxi and we had to pay the fare — Dan reckoned that when I got on-air, it should be the first thing I mentioned. Funny! 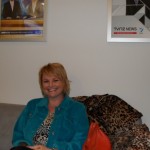 The white room. We spent a quality 20 minutes in a white room (evidence to your left), I think they reserve the proper Green Room for the VIP guests, politicians, celebrities, CEOs and suchlike. Ours was most definitely not green. But we did get tea and coffee in a very functioning flask and I got to see how they were positioning my segment in its lead up. They like to tease a bit on this show, all in good humour and I must say, the presenters on this show are love-ee-lee…. but I did start to feel a bit nervous. Like I might be made out to be Imelda Marcos without the subjects and political tax evasion scandal.

My 7 minutes. Pippa and Jack were very friendly, although I suspect that Jack’s appreciation for this particular topic was at a lower ebb than Pippas. Gotta tell ya, my respect for TV presenters of those kinds of shows has gone up – the sheer volume of various topics they need to get across in one morning is staggering. And to be even vaguely conversant with each guest, let alone well informed, takes some skill and attention. So I tip my hat to them. Not that I imagine either of them will read this blog. Pippa made the interview so easy – very conversational. Like it was “just us”. Yes, let’s forget however many hundreds of thousands of people are watching. And the seven minutes zoomed by before I had a chance to say “designer consignment sale”. Now, if Andy Warhol is right, does that mean I’m “half done”?

Check it out. You can check out the segment on this page. Love to hear your thoughts on the segment…. not everyday a girl gets to have her innermost, er, things available for the world to see. Right?