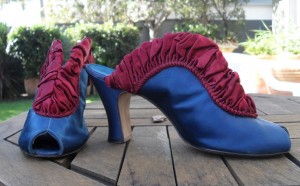 Greetings and welcome to a beautiful mid Winter day here on the Sunshine Coast. It is a balmy 18 degrees Celsius, the sun is shining and wait – is that a bird I hear singing? This must be paradise.

We’re up to blog #54. On Sunday I received a new pair of shoes. WAIT! Before you go calling the Challenge police (well, that’d be me), hear me out. I haven’t broken the challenge rules. Firstly, the shoes are not new new. They’re vintage. See? That’s them in the photo to the left – you can tell they’re not new new, right?

Second, and most importantly, they were a gift. From the Diva – remember her from blog #14? We’d been invited to their beautiful canal-side home and after many glasses of champagne, the Diva mentioned this sensational pair of shoes that she had. The details are champagne- (excuse me – white carbonated wine)-induced sketchy, but they may have been gifted to her, also. However they came to be residing in the Diva’s wardrobe, they were too large for her feet.

Her loss was my potential gain, my foot being a half size larger than hers. (how do women know these facts about one another? Can you imagine a bunch of blokes knowing that their mate has a foot size half a size larger? They barely know one another’s names sometimes, let alone vital details like foot size, belt measurements and the names of wives and children).

Many glasses of the good bubbly stuff were being consumed at this stage of proceedings. I put the aforementioned and above-pictured shoes on my feet, and it was like Cinderella and the glass slipper. They fit like a glove. And for shoes with a heel, they were comfortable (and yes, I have since put them on and they’re still comfortable, even though I’m now completely sober).

At first the Diva was reluctant to give them to me straight away. She said that she and Terry, her divine husband, had already decided that they’d end up in my wardrobe. But she wanted to attempt to wear them at least once before she gave them to me. I can understand her thinking here, although possibly millions wouldn’t. I guess the male equivalent is a guy who’s giving his chainsaw away and wants to chop down one more tree before he gives it to his buddy. Or something.

Anyway, I finally took them off my feet — this is after about 40 minutes of admiring them on my feet, modelling them for the other lunch guests and sprinkling the conversation with words like “oh, you’re going to New Zealand next week? So, you wont be needing these shoes then, will you?”. It was funny at the time. Once the shoes were off my feet, the Diva proceeded to put them on as she ushered us all to the door. Terry was berating her with words such as “just give them to Jilly! She’ll end up with them anyway!”. I wisely kept silent during this transaction, Terry having been a senior sergeant detective with the Sydney Police, he can be intimidating when he wants to, and he’s not nicknamed the Bear for nothing.

Finally, with the front door in sight, Diva removes said footwear and stuffs them in the top of my handbag. And “stuff” is indeed the right verb, I tell you… I could tell she was experiencing mixed feelings. I’ve been waiting for the phone to ring and the Diva to say something like “you know those gorgeous vintage shoes I gave you on Sunday? Well…..” But so far, nothing. Maybe this means I’ll get to keep them after all.

And I’ve been thinking about the question I posed in the last blog about clothes swaps. Namely: is clothes swapping a breach of the challenges spirit, if not a breach of the rules? And I reckon the answer might be NO. Especially if it is being done only intermittently and not every week or somesuch. Now, I know what you’re thinking — I’m only saying that because I was given these shoes on Sunday. No, no. Ok, maybe just a little bit. But mostly I’m saying that because I believe it.

The occasional clothes swap (or receipt of ‘new’ items given by friends and family) is an acceptable component of the challenge. That sounds reasonable. Right?

These Shoes Will Never Love Me

Massage or New Shoes? Why Experiences are Better Than Things
Want to share?