Summer is in the wings – you can feel it…. won’t be long now and we’ll be whinging about how blinkingly hot it is around here.  But for today, lucky post #75, we’re in heaven. 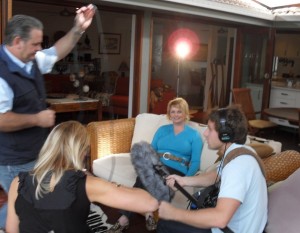 Today I’d like to reflect on my experience of being on Channel 7’s Today Tonight show. I’ve been lucky enough to have received a little bit of media attention on my story and the 12 month challenge to date.  I was on two TV shows in New Zealand in May and June of this year (which you can read about here and here).  Both were outstandingly positive experiences so I was looking forward to a media experience a little closer to home.

And it didn’t disappoint – it was a blast!  Through a media call on recovering shopapholics, I contacted Lucie the producer, who was keen to include me in their upcoming story.  Today Tonight wanted to have a serious look at shopaholism (rather than the wheee – aren’t they silly spending all their money! versions that are often told).

They were keen to include an Australian in the story (there seems to be various people with American voices who have something to say about shopaholism, but less people with Aussie accents).   Because I had started the 12 month online course for recovering shopaholics (which you can learn about here and sign up for here), and therefore had something to offer in terms of how to break the cycle of shopping too much, they thought I’d be a great inclusion in the story.   Woot!  I’m in!

The crew came to film in late July and they spent about 3 hours with us in total.  The first couple of hours were at home – that’s a shot of us all (above) in ‘interview mode’.  Caroline had some pre-prepared questions that I answered in what I hoped was an intelligent and yet warm manner.  I was channeling my best Oprah (you know how she loves to do half the talking in her own interviews?) when I was responding to her questions.  Doing my best to provide thorough answers whilst trying not to ramble on.  The words “20 second sound byte” were chattering in the back of my head.

Dan took a bunch of photos of me with the camera crew, which you can check out here.  Nice bunch of people – Andrew the cameraman and general director (definitely the boss, but in a very nice way – I was happy to be pushed around directed by him), Julian the sound man (hip and happenin’ (his shoes told me that much) and very nice young bloke) and Caroline the interviewer (with the most gorgeous soft English accent).  Tell ya – we bonded.  Of course, I haven’t spoken to any of them since, but I know they’re still thinkin’ about their time here with us.  (ha!  it’s funny – what is to the interviewed (ie: me!) a unique and perhaps once-in-a-lifetime experience (being filmed for a TV show) is for the crew all in a day’s work – literally.  It’s not an extraordinary day for them, like it was for me.  I get that.  Really). 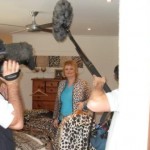 We did some taping in our walk in wardrobe (if you saw the segment, you’ll have seen the shots of the wardrobe).  We also did some shots of me with my 12 animal print jackets (which also feature in the story quite heavily).   That’s us (left) setting up the shot for best effect. See how pliable I look? 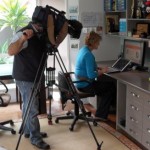 And we did some shots in the office, showing me scrolling through my website (right).  It’s amazing how good those few seconds of footage look on screen, when they were kind of boring to film.

It’s also fascinating how about 25 minutes of film can be edited to be about 5 seconds on camera.  These guys have the patience of Job.  And you could tell that they’d also done this a fair few times before — Andrew knew which shots he wanted and knew how to set ’em up to get ’em.  Fortunately, I was as pliable as plastecene and made his life exceedingly easy by doing exactly what he asked (well, that’s how I remember it!). 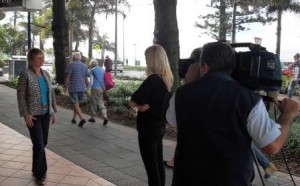 We finished the shoot by going up to the Mooloolaba strip and showing me looking longingly into shop windows, walking into a favourite store (Zara’s shoe store on the corner of The Esplanade and Brisbane Rd) and talking to camera (like left).  Lots of jokes for the passers by who were checking us all out… Andrew’s favourite joke to throw over his shoulder at interested coffee drinkers was “it’s not every day you get to see a Lotto winner!”.  Tres drolle!

The story aired on September 15 2010 and you can read about it on the Today Tonight website here.  Our media page is also a good place to stop by.

That same network — Network Seven — have invited me to be a guest on The Morning Show next week.  I’ll be in studio with Kylie and Larry next Wednesday.  Sure am looking forward to that!  Right?

Preloved: The Story of My Life
Want to share?