G’day!  And welcome to blog #82.  I haven’t said “G’day” in a little while now so thought that would be a warm and welcoming way to start this message.

I’ve been in the US now for 10 days and I’m lovin’ it!  Three-quarters of our Shop Your Wardrobe members are from the US and it’s a country that really gets the concept of you-can-become-anything!  A reality TV star!  A basketball-player-turned-senator!  A law-breaking drug-addicted Hollywood starlet!  Anything really is possible in the home of the brave and the land of the free. 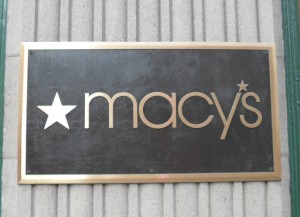 So, this week I had a real challenge.  I was in downtown Philadelphia and we went to the large Macys there off the Avenue of the Arts.  This is a beautiful old building, and was previously the John Wannamaker building.

Of all the many department stores in the US (Neiman Marcus, Nordstrom, Saks Fifth Avenue, Bloomingdales, Bergdorf Gooman, JCPenney, Sears, Dillards – that’s the ones I can remember off the top of my head) – Macys is the one I enjoy the most.

The store I feel the most at home in.  Where the merchandise meets that nexus of desirable and suitable.  Where the price points are achieveable.

It’s also where I’ve purchased most of my underwear over the last few years.  Ok, I can see I’m going to have to explain.

So, there’s two parts to women’s basic underwear – the top (bras) and the bottom (undies, knickers, panties, bloomers, whatever you want to call them in a PG-rated blog setting).  The bottoms are not an issue for me, but the tops – weelll, they’re another story.

I subscribe to the philosophy of wearing properly fitting bras.  They are a true foundation piece to your dressing for the day, and can make a huge difference in how you feel and how you look.  I have two tips for women who want to explore more here:

I read once that a woman’s bra size can change as much as 7 or 8 times in her lifetime, depending on a number of factors, like if she has children, how frequently she has them, when she enters menopause, and so on.  This “7 to 8 times” does not factor in any non-nature-inspired changes to a woman’s breast size, such as seeing Dr Steyn in Beverly Hills for a breast enlargement.  Those would be extra.

My first bra fitting I went into with a healthy dose of scepticsm.  As you know, if you’ve read the advice I gave my 13 year old self, bras have featured in my life for many many years.  This is no small thing, for such a small thing.  If you get my meaning.

When I was in my early 20s, a well-meaning friend suggested that that ‘getting fitted’ was a good idea and I so went along to Lady Bird Intimates, just to humour her.  I was sure I would not find out anything new and that I’d walk away, smugly triumphant that I was wearing the right bra size.  How small my world must have been, now that I recount this story out loud.

Anyway you know how this story is going to end, right?  I was way off – wearing a 12C (34C) when I should’ve been wearing a 14D (36D).  Hmmm.  Lesson learned, point taken, egg administered to face, bra size immediately adjusted.

Since then, I am acutely aware of how one’s foundation pieces truly are that – the foundation.  They’ve got to be right, fit right, look right. If you’ve ever had an under-wire come loose from its holdings and attempt laparoscopic chest surgery of its own volition on  your unanaesthesized body, you’ll know what I mean.

Finding bras in the right size and in great patterns and colours and at a reasonable price (I’m talking less than $75 for a bra here) in Australia – I have found to be a challenge.  You can get them in the right size and in a beautiful colour – but not a lot of funky animal print, say.  Or you can get them at a reasonable price but they’re a bit boring and well, once you get above a certain cup size (C, I’ve found), the fit doesn’t tend to be so good.  You can’t just move everything out a centimetre to go from a C to a D – it’s a whole different, er, ballgame.

So, here is what I’ve found:  underwear that I find in Macys fits the bill.  Excuse the pun.  It really does.  I can find great colours and funky patterns (lots of animal print!).  And it’s reasonably priced.  And the sizing and fit is great.

So, this is the backstory to how I found myself wandering through Macy’s Women’s Intimate’s on Saturday afternoon.

The specific story is that the ladies bathroom was located past it.  So, I had intended to avoid this department altogether, but lo and behold, I found myself in the midst of it.

On top of the overall context of finding sensational bill-fitting underwear in Macy’s… I am now over 10 months into the challenge and am finding that some of my, er, more frequently worn and smaller items (those with lots of, say, lycra in them) are starting to show signs of wear & tear.  Well, wear anyway.

They’re giving out, giving in, and letting me down.   Literally.  So, onto my Replaceables list are going the exact items that I now found myself walking through on Saturday afternoon.  In Macys in Philadelphia downtown.

Items such as the ensemble you see to the left here.  THAT is exactly the kind of thing that I would’ve been interested in.   You can see why, right?  (I mean, who wouldn’t want a body like that – and it comes with the bra & knickers!)

So I found myself in the midst of temptation, of a sort.  But rather than resist and avoid, tactics I employed earlier in the challenge with great success, this time I did something different.

I acknowledged how desirable I found said items.  I allowed myself to feel that, just for a moment – I didn’t dwell on it or overly dramatise the moment or the emotion. No.  That’s resistance of another nature.

I acknowledged it, I let it go.  Like the #88 bus on its way to a destination that I once wanted to visit, I saw it and I let it pass.   I also reminded myself that there issome emotional  relief, if not rainbows and unicorns, on the other side of taking yourself off the hook from having to decide.

Y’see – I had nothing to decide.  I have made a commitment to have a year without clothes shopping, and I’m sticking to that.  I don’t have to decide whether to buy this or that.   I’ve already made that decision.  I made it on December 15, 2009.

All I have to do now is eat my greens and take my vitamin pills every day, so my brain stays limber enough to remember that I’m on the challenge. And once I do that – I’m off the hook.  I have nothing to decide.  Even when faced with temptation.  There is nothing to decide.

I cannot tell you how freeing this is.  The thing I feared the most when I started this challenge — seeing something that really appealed to me, that I wanted to buy — and not being able to….. has turned into the key to free me.  It’s alchemy of a sort.  But instead of turning base metal into gold, it’s turning “below the line” emotions into “above the line” emotions. Who knew?!

I would not have believed you if you’d told me this is how it would turn out.  Not at the beginning of the challenge.  Probably not even last week. (ok, maybe last week… but maybe not last month… or at least, not 3 months ago).

Resist and Avoid (the Twin Towers to Defeat Temptation)

Love, Loss and What I Wore

Style Secrets From Our Grandmothers Part 1
Want to share?