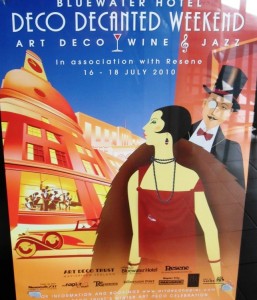 Greetings from Napier, the Art Deco capital of the world! We are up to blog #39 and thanks for reading. Napier is on the east coast of the north island of New Zealand and has a reputation the world over for ‘doing deco’. After the 1931 earthquake, the city was rebuilt by three architects (and many builders and craftsmen) who all agreed that a consistent style should be used for every new building.

Art schmart, deco schmeco? The art deco style is very distinctive. In architectural terms, two iconic buildings characterise the style, both in New York: The Rockefeller Center (now famous to a whole new generation as being the workplace of those funny folk on the TV show 30 Rock) and the Chrysler Building.

Art deco had an influence on everything during its time – architecture; car design; interiors for everything from homes to offices to ships; modes of travel; music (art deco is sometimes used interchangeably with the term the jazz age); and of course clothing. The way I think of art deco is: if you can imagine Agatha Christie’s famous Belgian detective Hercule Poirot wearing it, travelling on it, eating in it, dining with someone dressed like it, displaying it in his Whitehaven Mansions apartment — then its likely to be art deco.

You can read up about art deco in many places on the internet, but here’s the bits that were relevant to this blog. Art deco had three main influences:

Art deco came to a screeching halt as style de rigeur during the Great Depression. It was considered inappropriately ostentatious, gaudy and gauche to have all those images and icons of prosperity, when people were lining up around the block to get food stamps. You can see their point, can’t you. But I’m sure glad that the places like Napier maintained this style and we get to go and look at it. As a beautiful little city, Napier is a stand out, and its because of this almost institutionalised art deco-ness. 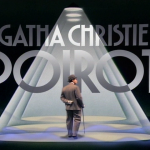 Back to Poirot. And the pervasive presence of the art deco style is one of the things that makes watching Agatha Christie’s Poirot such a treat. The attention to detail in everything on this show (over 19 years in the running) is amazing. Everything from Poirot’s spats (these are things he wears on his shoes, and do not refer to a small altercation or something a cat does if she’s cross with you) to his cutlery is carefully considered. Although there’s nary a bronzed naked lady juggling illuminated globes to be seen. Not Poirot’s style. Right?