Am I Not Pretty Enough?

Greetings dear readers and welcome to blog #72!  We have a delightfully overcast Sunday here in not-so-sunny Queensland this morning.  You know, I’ve been talking to a few people about the emotional reasons we shop.  And I’ve been learning some great things from them.

Lulled. I was emailing with my  friend Valery about the allure of shopping and the anaesthetizing effect it has on so many of us.  When shopping, we are lulled into a state of semi-consciousness (well, that’s at best) where our brain activity is slowed down to a distant hum.  We’re not paying attention, we’re not tuned in, our brains are not switched fully to the ON position.  It’s not helped by the environments many of us shop in (which I talked about last time, when discussing the Impact of Gruen).

This is a dangerous state to be in where your credit cards are involved.  Who knows what you could come home with? 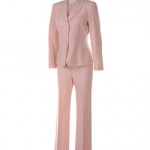 Pale Pink Pyjamas Suit (speaking of what we could come home with when shopping in such a tuned out state, I once came home with a beautifully tailoured pale pink suit, resembling the one to the left.  I looked like I was wearing a pair of beautifully pressed pyjamas on the one occasion I wore it as a suit.  I laboured on with it for about a year, splitting it up and wearing the jacket a bit.  I’ve since learned that pale pink is a colour that makes me look like a need a blood transfusion anytime in the next 30 minutes – so not my colour.  I could never quite find a way to wear those pale pink pressed pants though… well, not in a way that didn’t make me feel like I should be singing “the wheels on the bus go round and round…” for an audience of children).

Not ‘whatever’ enough.I mentioned the words “the allure of shopping” and Valery said something very interesting (it’s a habit she’s gotten into – saying interesting things).  Allow me to use Valery’s exact words:  “I see it more as “If I just by one more Prada bag, then I’ll be good enough. It is the allure of being “whatever” enough to fill the void within”.

Yes.  You said it, sistah.  The gap in ourselves comes first, then the shopping to fill it comes later.  Which brings me to the title of this post.  It’s the title of a song the extraordinary Kasey Chambers wrote and performs (and whom I had the great pleasure to see perform live, which, YES, I blogged about way back in April).  In the song, Kasey agonises over all the things she isn’t — is her heart too broken? does she cry too much? is she too outspoken? and yes — is she not pretty enough?  Then she implores – don’t I make you laugh? should I try harder? 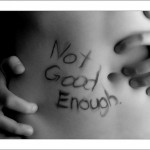 That song speaks to a part of me that I don’t even want to admit to owning.  Kasey manages to use a very foot-tapping ditty to sum up the heart-breaking lesion that grows on our soul when we feel “not whatever enough”.   Now, Kasey doesn’t go on to mention shopping.  The song was probably perfect without trying to add “credit card debt” into the lyrics.

But that’s what many of us do.  We feel this sense of lack, a tug of wanting and we go shopping!  Except we do it in a coma.  We can’t pin down the feeling of emptiness, or we don’t want to.  We just know that something feels…. missing.  And maybe buying a new pair of high heel wedge sandals for summer will fill that void!  Yay!  So we buy them, and feel  a temporary rush of completeness.  Which often dribbles out and evaporates before we’ve even put the bag in the back of the car.  Leaving us to start the whole cycle again.

Well, that’s all very uplifting, isn’t it?  Alright – it’s a bit of a bummer when you lay it out like that.  I get it.  Of course I do – I’ve lived it.  But you know there’s a way out, right?  It’s not all dark and ominous and depressing.  That’s a whole other song.

The answer is a whole bunch of stuff, none of which sounds like a lot of fun when you read it at first glance.  But think of it this way —  neither is paying off thousands of credit card debt over a 5 year period, right?  Or buying yet another 20 items that you have no need for, can’t remember wanting until you saw them, and don’t go with anything else in your wardrobe, right?  Yeah – those things are FAR worse than this: 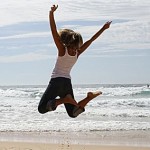 And the big kahuna of the answer is this:  Start living your life, not spending it (we can help you with that).   There’s that deeply depressing saying that no-one on their death bed will ever say “I wish I spent more time at the office”.  Well, I’ll add to that – no-one will ever say “Thank God I bought those 20 t-shirts in all different colours – that really fulfilled my life”.  Right?

Advice for my 13 Year Old Self