Advice for my 13 Year Old Self

Good morning!  Welcome to blog #76 and today I’d like to give some advice to my 13 year old self. 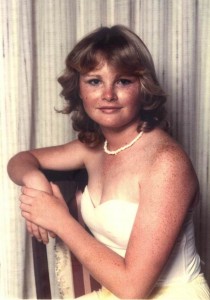 There I am!  I’m the youngest of three, with two older brothers.  Yes, they made my life a living misery which was their birthright (even so, they seemed naturally adept at it, like it was no effort at all).

When I was thirteen, we moved towns.  From a large-ish regional centre of a hundred thousand or so to a smaller mining town or less than 10,000 people.  Big change.

By the time I was thirteen I was wearing glasses and a bra.  Those two things kind of neutralised one another, in the invisibility/visibility stakes anyhow.

This giving advice to your younger self is quite a popular phenomenon.  It is a concept pioneered by Ellyn Spragins in her books, New York Times bestseller What I Know Now (2006), If I’d Known Then (2008) and What I Know Now About Success (2010).

I saw it first in a magazine a few years ago, a woman in her 50s giving advice to her 10 year old self.  It was poignant.  And you know what they say “it’s never too late to have a happy childhood”.  I think they’re referring to the power of therapeutic interventions like reframing, rebirthing and re-writing.  But perhaps laughing, loving and drinking will also help to re-create those memories of childhood?

Ok, so here I go.  Here’s the advice I would give to my thirteen year old self (and I’ll try to make this as style/fashion/shopping focusesd as I can, since that’s what’s probably brought you here, reading this, in the first place, right?)

And before I start, let me just say this.  I could just recite the entire set of verses from the Sunscreen song , except perhaps the bit about living in New York  City and Northern California (that would have been weird advice to a kid living in Central Queensland, Australia, right?), it’s all so on point.  But I won’t – you can listen to the song yourself.  That said — there is one piece so good from that song, I’m going to start with it.

Ok, there’s probably a lot more I’d say to my 13 year old self.  I might have a private 1:1 session with her to cover a few more topics.  Maybe later.  It’s fascinating to think what might have happened if time travel were possible and our younger selves could hear, and take, our advice from now.  How our lives may have been different.  What advice would you give your younger self?  There’s one more thing I’d tell my younger self:  those typing lessons in Grade 9 Typing — they’re worth it.  Who knew typing would be such a millenium skill.  Right?

Lessons Learned from My Year Without Clothes Shopping

Make 2011 Your Year to Shop Your Wardrobe

Easy Alterations to Extend the Life of Your Wardrobe, Part 1
Want to share?