The Story of My Life, Part 3

Posted by Jill Chivers in Interviews and Profiles, Shopping in the Movies and Media

In the first and second parts of this post, I shared how the story of my life came to be chosen as worthy of being told by Australia’s premier film school, and day 1 of filming.

You can catch up on part 1 here and part 2 here.

We pick up the story on day 2 of filming.

Ah, now this was an enchanting and magical day of filming.  Why?  Because the set was so delightful.  This documentary is what is called a “hybrid” – it uses various creative and technical devices to tell the story, and isn’t a ‘straight interview’ style of documentary.

At this stage, I don’t yet know what the final piece will look like, what its hybrid form will be, but the set gave me some clues: it contained a series of old furniture.  An old dresser that you sit at, with 3 mirrors (a middle static mirror and two side/wing mirrors which move); an old wardrobe; an old television; and an old chair.

Again the studio was filled with a ready, professional and enthused crew, including an industry professional who was working with us for the day.  I learned that the role of this man, PJ was his name, whose official job role was the Assistant Director (“the AD”) was to help make sure we made it through the day – we had an incredibly ambitious shoot ahead of us.

My preparation for the second day of shooting was the same as for day 1: nothing to learn or remember, just a willingness to be open and real.  And to tell my story as clearly as I could.

I had made a commitment that I didn’t want to create or display a particular ‘image’ of myself or my story, and if that meant there were ugly parts, so long as they were real, that was okay.

For someone who has spent a significant portion of their time accumulating appearance-related items and being concerned with how she looks, this is a fairly big deal.  I was abandoning any notions of control about how I was going to look or come across in this film. 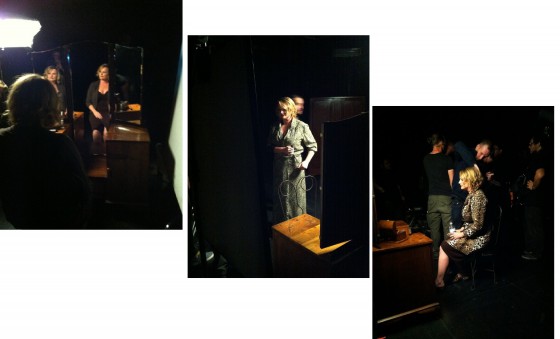 This second day of filming was intriguing for me.  Not only was I performing in a somewhat similar way to an actor at times, but the language used on set, especially by the AD in his communications with the technical people at every stage of the day and for every shot, was completely foreign to me.

I knew he was speaking English, but I didn’t understand a single word of what he was saying!  And of course I didn’t need to (he wasn’t speaking to me), but it was so fascinating to spend the day around a person who may as well have been speaking Latvian for all the sense it made to me.

I thought I’d gotten a lot of the emotional moments out of the way on the first day of filming, and there’d be no more tears.  Why did I think this? I have no idea now, and knowing the skill of Shaylee, the director, in her questioning, I should have been prepared for anything.

As it turned out, being open and willing to go where the questions took me, most importantly in an emotional sense, was all I needed to be ready for.  And I was.

This time, the moment of tears came when I was asked to write all the horrible things I said about myself to myself, and those I imagined others might say about me, on a mirror.  When Shaylee and I were discussing this in the hallway, it didn’t seem like a terribly fun thing to do, but it didn’t seem overly difficult either.

But when the moment actually came – standing in front of this mirror with the writing implement in hand (a lipstick), I started shaking.  It was like my body knew what I was about to do was somehow not right or would be damaging, if only momentarily, to my psyche – even if my brain tried to rationalise it away as a creative device in the storytelling journey.

Shaylee and the AD were very patient and waited while I stood there, lipstick in hand, shaking and crying.  If these people hadn’t been so enamoured with my story and supportive of me, I would have been embarrassed.  But they made me feel that it was okay.  So long as I was being real, then it was okay.

I couldn’t do it.  Not at that moment anyway.  I had several goes at it, but every time I started to write the word “ugly” on the mirror (the first word I thought of as being one of the many horrible things I’ve said to myself about myself, and imagined others thinking/saying about me), I was so physically overcome, my hands shaking, tears streaming, that I couldn’t write.

Shaylee even invited me to start with something I knew wasn’t true.  All I could come up with was “very tall”, which isn’t actually anything I’ve ever accused myself of, or imagined anyone else saying about me (and if they did, all I’d think is they shoulda gone to SpecSavers) so apart from being a brief emotional circuit breaker which resulted in a little lift in mood, that suggestion didn’t help me.

We came back to this later in the shoot, and I was able to fill the mirror with words, minus the shaking hands and streaming tears.  So we got the shot. 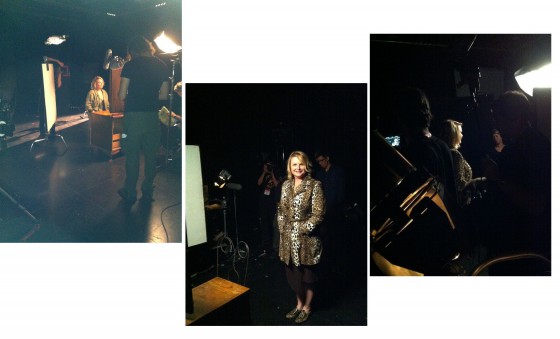 Let’s go back to the beginning

Another tough moment was slightly later in the day when I was asked to write about what I imagined the genesis of my overshopping to be.  Some people are very big in excavating their past, and I have been, too, at times.

Of late, I am less interested in fossicking in my past and reliving painful memories, because I have a different understanding of how our psyches really work.

But I wanted to be true to what I was there to do, so I went with it.  I shared some things about my childhood and emotional wounds I sustained from as young as 13.  These were things to do with the emotional burden I felt was pressed upon me by members of my family (well one in particular), and how heavy that burden was for me as a child… and even into adulthood, to carry.  How crushed I felt to be handed this burden (which is how it felt) and how totally ill equipped I was to manage it.  And the legacy that early experience has had on me as an adult.  And as a shopper.

I want to be clear that I don’t blame my family or my upbringing for my adult problems.  They are part of the picture that is me, part of my story and my journey so far.

But those experiences don’t define me, and they aren’t an excuse for abandoning my commitment to what I think of as “emotional responsibility”.  Which sounds very grown up, but what I mean by it is that no-one can make me feel bad without me somehow allowing it.

My emotional state is my own responsibility – nobody else’s.

Day 2 of filming was a long day for everyone, about 12 hours in total (the longest of any shoot I’ve ever been involved in).

After I had said my good-byes to everyone and Shaylee was walking me out, I shared with her (with a somewhat shaking voice, full of emotion) how meaningful and fulfilling this experience had been for me.  We had a long hug, and then she walked back into the building, giving a “Whoop!” of exultant emotion as she went.

We had done it!

The story of my life

This experience was incredible.  Powerful, challenging, cathartic, joyful, fulfilling.  It was so many things and I soaked up every element of this experience.

It had the added bonus of reminding me of my innate value and contribution (something I can lose touch with too easily). And it made me feel part of something bigger, and more important, than just myself.  It was good for my soul.

When I returned home after filming, I felt like I’d come home from an exotic land.  It felt like I’d just travelled somewhere wondrous, with a new language and intriguing customs.

I feel incredibly lucky to have had this experience – no matter what the final film comes out like.

It will stay with me as one of my life’s most enduring and endearing memories.

You can watch the final documentary (which is short and powerful), “Preloved”, by clicking here.

“Preloved” was submitted the following international film festivals – what an honour to be submitted, even if we didn’t make it into the final line-up at those festivals.

Film Festivals “Preloved” was submitted to

Preloved: The Story of My Life