Is Shopping Wrecking Your Life? Musings from The Project

Posted by Jill Chivers in Fashion, Style and Shopping, Shopping in the Movies and Media

This week, I was fortunate enough to be included in a story about shopping addictions on a very funky show here in Australia called The Project.  It airs at 6pm Sundays through Fridays and is a news and comedy show that is presented in a panel format.  It’s news, but not as we usually know it.

I’ve had The Project on my wish list of media I’ve wanted to appear on for some time now, and it was a delight when I saw a media call-out from the show a couple of weeks ago, looking for people to appear in this story.

Anytime there’s a story on shopping addictions in Australia — well, anywhere in the world really — I’m interested in it.  If I’m a good fit for the story, I’d like to be included in it because I feel I have something to say on this topic and a real contribution to make to this conversation.

The media is a fascinating beast, and in the now 23 television shows (some live, some pre-produced) and the many radio and print stories I’ve appeared in over the last ~2 years, I’m always learning something new about how the media work.

This story was interesting in that I knew the cameraman who also acted as ‘soundy’ (the sound person) and director.  The producer asked her questions via mobile phone set to ‘speaker’ as there was no journalist attached to this story, like all The Project feature stories.

The story took about half a day to tape, and my time on screen is about 60 seconds.  That’s fairly typical I’ve found – there’s a lot of time spent filming segments you’re never sure are going to end up in the final edited piece.

The story finishes with a quote from Judy Glen who proposes that an unchecked shopping addiction will end up wrecking your life.  A very powerful way to finish this short story.

The final story is about 3 minutes long and you can watch it here.  (and if this doesn’t work somehow, please go to our Media/Television page – www.shopyourwardrobe.com/media/television — and you’ll find it there). 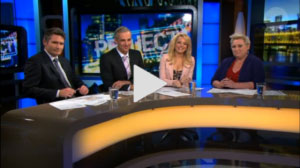