Posted by Jill Chivers in Shopping in the Movies and Media, Shopping Messages

Recently I was asked if I thought whether shopping addictions were genetic or learned. The Daily Mail in the UK posted an article about whether shopping behaviours were in the genes.  I’m sure I spelled that last word correctly.

It sure sparked some interesting comments on the Daily Mail site, and it must’ve pricked the ears of the Network Seven people as well.  A producer for the SUNRISE show (the most popular non-cable early morning show here in Australia) phoned me and asked me to appear on the show to discuss this. 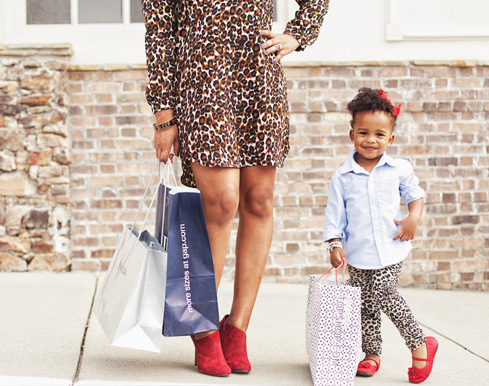 Here are my thoughts on the Daily Mail article and this issue:

Do parents influence the behaviour of their children?

Absolutely. Isn’t this one of the primary goals of parenting — to influence your children?

The problems arise when parents pass along unconscious or ‘unchosen’ behaviours like poor eating habits.  Or compulsive shopping habits.  Or an illogical love of country folk music which defies all social pressure (and must be indulged in in private – not that I’m talking about me here).

There surely can’t be any, or much, doubt that the behaviour of the parents most assuredly, directly and deeply impacts the development of the child/children.  The question is: how are you influencing your children? And how do you want to influence your children?  What are they learning from you, without you making a ‘learning moment’ out of it – the stuff they are just picking up from watching you live your life?

Are the behaviours we were exposed to as children like albatrii around our necks, never to be truly left behind?

Absolutely not.  It is quite possible to consciously choose which behaviours you wish to take with you into adulthood, and to foster the reinforcing of those behaviours so you learn new habits – consciously chosen habits.

This kind of consciously chosen behaviour choices take effort, and there’s the catch.  It all starts with that first step of awareness: recognising that you have a bad habit or a compulsion or a set of behaviours you wish to change, and understanding the genesis of those behaviours and attitudes (without assigning blame).

Yes, it is possible to develop healthy eating habits – even if you didn’t develop them as a child.

Yes, it is possible to become a conscious shopper – even if you weren’t exposed to this as a child.

Yes, it is possible to develop more socially acceptable musical tastes, or at least put your John Denver and Tom T Hall CDs away when you have company.

I don’t believe so.  Scientists debate and discuss this issue from time to time and there’s no unequivocal answer to this question from the scientific quarter.

My own belief is that shopping per se is a learned behaviour, and over shopping and compulsive shopping is most definitely learned.

What I’d add to that is that for many women whose shopping habits were learned at their mothers knee, by the time they hit adulthood they’re entrenched and unconscious.  Their awareness around how healthy or otherwise their shopping habits is low.

This doesn’t mean those behaviours weren’t learned and that they’re somehow “genetically” handed down.

The  journey back to conscious shopping for these women starts with awareness.  To owning up to their situation and recognising they have a problem, or a situation they wish to change.  Sounds painful – but it’s one of the most liberating and precious moments you can imagine.

My Way of Dealing with Shopping Addiction

Shopping And The Six Human Needs

Partners in Crime: How Who You Shop With Affects Your Shopping Behaviour

Shopping And The Six Human Needs Part 2
Want to share?