How Keeping Up with The Jones’s Can Kill You

Posted by Jill Chivers in Shopping in the Movies and Media 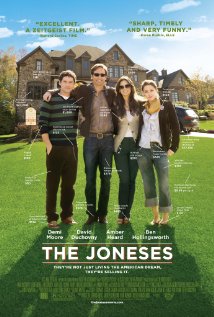 Imagine if 1984 and The Devil Wears Prada were to procreate and create a movie love child.  That movie would be “The Jones” –  a 2009 film that tells the story of the “perfect” nuclear family.  Steve and Kate, played by David Duchovny and Demi Moore, are the impossibly beautiful perfect couple who move into a swish new neighbourhood with their impossibly adorable teenagers, Jenn and Mick.

Their house is jaw-droppingly Gor-Jess. It is filled with fabulous furniture and stunning home accessories, huge arty black and white canvases of the family and every gadget known to man.  The garage has four cars in it, all new, all with the latest and greatest sticking into and out of them.  The closets are stuffed with new designer clothing and accessories.  It’s all so… perfect.

You know something’s off right from the get go, but you’re not sure what it is.  Could it have something to do with how the city and State are not identified (we could be in Boise Idaho or Portland Oregon for all we know)?  No, as displacing as that is, it’s not it.  Something else is wrong.

Could it be that Jenn makes at pass at Steve (her “father”) in the first 15 minutes of the film?  No, as disturbing as that is, it’s not it. Something else is wrong.

Could it be that nobody seems to work and yet they have all mountains of moulah for pro golf lessons and daily trips to the ladies day spa?  No, as flat-out unbelievable as that is, it’s not it.  Something else is wrong.

Because the Jones’s do work.  It’s just not at a job that you can really see.  Or respect.  Or even believe exists.

The Jones’s are on commission, you see.  They are “stealth salespeople” of stupendous shallowness – if they were a pool, the water would barely cover your toes.  Their stealthily made sales are tracked monthly and hard measures are put in place for poor performance.  It’s back to the golf range for Steve when he fails to inspire his golf prospects er, buddies to buy the same Callaway 5 irons that he’s using.

There is much devastation in The Jones’s.  There’s death – someone dies as a result of over consumption (I knew that shoppng could kill you!  I just hadn’t seen it played out like that before).  There’s destruction – of property, of relationships, of identity. There’s defiance and desertion – public confrontations followed by screeching tyres.

I don’t know if I liked The Jones’s or not.  It disturbed me, that’s for sure.  It was quite beautiful to watch in many ways (the clothes! the furniture! the David Duchovny!)… but there was a something sinister about it.  I know that we’re being manipulated and manouvred by the marketing and merchandising mavens of the world (I’ve written about this many times before, like here and here).  But there was something unpalatable at seeing it laid out so…. bare.

Never Give Up. Ever.