Knowing when to let go

A wonderful and liberating quote I read recently was “Sometimes you don’t realise the weight of something you’ve been carrying until you feel the weight of its release”.

I loved this.  Especially because I’m a perseverer, and I stick at things.  I believe in not giving up, and I’m very loyal – to people, to projects, to possibilities.  I seem to have a higher tolerance for hanging in there, when others say they would have bailed out long ago.

I’m not sure this is always a virtue.  Sure, sometimes it is.  But other times, letting go – lightly, easily, free from resentment and stress (ah, there’s the nub of the issue – it’s not just any regular kind of letting go!) – is the wiser choice.  The choice that will lead to greater happiness, greater contentment, and a surer sense of yourself.

I’m in the media.  I love sharing my story and viewpoints in the media, because I get to talk to a bigger audience and reach people I will never get the chance to meet in person.  There are heaps of people struggling with the same issues I have struggled with, and I believe it makes people feel less alone to hear someone talking publicly, and without shame, on an issue they share (and are perhaps keeping a secret).

One of the biggest secrets to appearing in the media is it isn’t really about you – it’s about them.  If you get all caught up in yourself when you’re on camera or on air or being interviewed, then it’s not much  more than a nerve wracking experience.  But if you think of all the people you are potentially reaching, and helping, and giving hope to, then you don’t feel so self-conscious and nervous.  The focus is less on you, and more on those (through the marvellous medium of the camera and the air waves) you are speaking to. 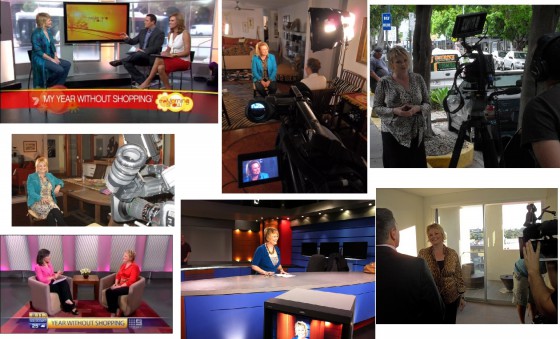 Some of the TV shows I’ve appeared on (23 so far, pre-recorded and live shows)