Posted by Jill Chivers in Helpful Books and Resources 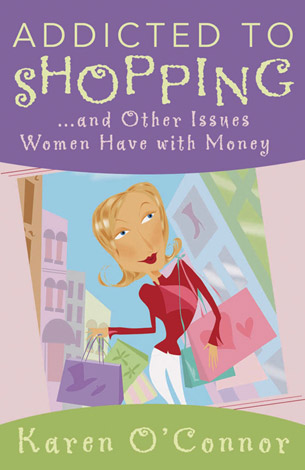 Addicted to Shopping is a book that I found uplifting in the end, but it had a few bumpy parts as I was reading it.  The author, Karen O’Connor, is an experienced writer – over 40 publications.  She is also a Christian and that theme is woven through her book on nearly every page.  If you are ok with (or at leasts have a a tolerance for) continual references to the grace of God and the necessity of his (her?) presence in your life to overcome your shopping problems, you won’t have a problem with that aspect of this book.

The book is really about women with truly terrible money problems.  What I’ve learned is that shopping problems and money problems are often related, but they are not the same thing.

You can have a shopping problem and not have a money problem.  And many of you may be in this same boat.  I was – I shopped way too much and accumulated way too much stuff, but I was fortunate enough not to find myself in personal debt purgatory.

Ms O’Connor tells many stories of women who struggled, and at the time of writing were still struggling, with these terrible money problems.  These stories, one after another after another, got me down after a while.  Although I appreciated the enormous power of the stories and how they were there to illustrate each section of the book.  The stories reminded me a little of Biblical parables, something my childhood was littered with.

What I appreciated in this book:

I’m glad I read Addicted to Shopping.  It certainly made me feel better about myself in many respects.  And it opened up an entire box of compassion for women who have gotten themselves into truly terrible situations.  Holes the size of the  Grand Canyon.

And just like the Grand Canyon, getting out of these holes is indeed possible – but you guessed it: there is no magic bullet (or elevator) in sight.  It’s step by unrelenting step.  But eventually, you get there.

You Can Slay Your Shopping Dragon