Stop Being So Mean!

Posted by Jill Chivers in Body Image, Self Care and Self Awareness

I was talking to a dear friend recently who’d been taking a trip down memory lane.  She had been looking through old photo albums and came across her honeymoon photos.  She was telling me that as she looked at photos of herself in a bathing suit lying on some sun drenched beach, she marvelled at how thin she looked.  How lithe.  How almost model-like her figure was.

The thing is: at the time she felt fat.  She felt plump.  She felt not thin enough.  Not good enough.

And 20 years later, she still feels fat, and not good enough.

And she’s a bit tired of it.  She hates feeling so bad about herself all the time.  Well, any sane person would.

I could relate to this. Apart from my heart hurting from listening to her talk about the last 20 years of mild self loathing, at least about her body, I understood what she was saying.

I haven’t felt good about my body for much of my life either.

I meet many women who have some form of mild self-loathing when it comes to their physical form.  They have a continuous stream of negative thoughts about their bodies, especially when they catch sight of themselves naked.

They rate their bodies as being sub-optimal.  Shower time can be an exercise in aversion therapy (don’t look in the mirror!) or in misery at what is being reflected back in the mirror.

It’s like we have the meanest boss who ever took oxygen, living inside us, dripfeeding us the most mean-spiried, acerbic, nasty, negative and repetitive messages about ourselves.

I said to my hurting friend,

“If you had a friend who, every time you talked to her, said the kinds of things you say to yourself about your body, would you want her as a friend?  I mean, every time she says mean things to you!  Not once does she ever appreciate you, or find something beautiful about you. Nooooooo!  Every time it’s “Look at those thighs – whoever saw such big thundery thighs!  And those stretch marks – my my, you look like a map with all those lines running across your tummy!”

And yet this is what so many of us do – we keep these awful “friends” who live inside us.  Our self-talk is so negative and so repetitive, it’s like an air conditioner humming in the background – we’ve stopped paying it specific attention.

Tune in and turn it off!

It’s time to start saying something appreciative to ourselves about our bodies, every time we look at them.

Malcolm Godwin in his amazing book “Who Are You?  101 Ways of Seeing Yourself” proposes that women have an utterly distorted view of their bodies.  In Part 1 of his book he shows us four images, the first as we really are, the second as we think we are (fatter), the third as we think men prefer us (thinner) and the fourth as men would prefer us (plumper). 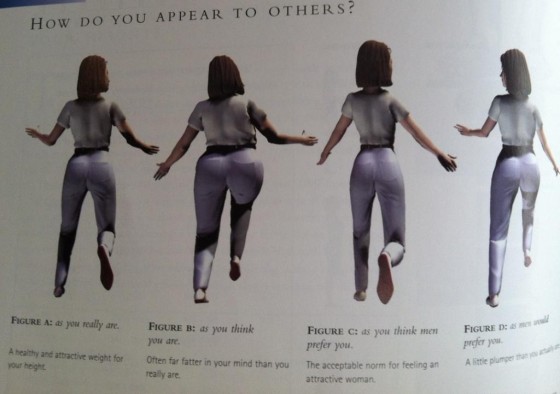 How we see ourselves and how others see us: they’re not the same!

Where self care fits in

If only we were kinder to ourselves.  As I was listening to my friend, I kept wondering how much happier and at peace she would be if she were kinder to herself. And the ironic thing is, she is so kind to everyone else.  Why does she miss out?  Where is her self-kindness?

I started paying closer attention to my body-focused self-talk a few years ago. It was so mean!  I didn’t have a positive thing to say about myself.   So I changed it, by making one little change.

Instead of everytime I came out of the shower and caught myself in the mirror, honing in on some perceived flaw and amplifying and repeating its ugliness over and over, I started to find one thing about my body that I liked.  One thing I could appreciate. One thing I could say “oh, I quite like …….. about myself.”

I kept doing this one thing thing until I started noticing other things that weren’t utterly hideous about my body, and then I’d notice those things, too.

And, without really noticing, I stopped being so mean to myself.  I stopped honing in those perceived flaws, and I stopped telling myself how ugly various body parts were.

I can’t tell you how much difference this one small change has made to how I feel about myself, my life, my place on this planet.

I wonder what would happen if you tuned in to what you’re telling yourself about yourself, and started being a little kinder to yourself?

When Does It Stop?

How to Stop Buying Junk Clothes

Who Are You? 21 Ways of Seeing Yourself

Hello Hips! A letter to my body
Want to share?